To help you choose the best time to visit the Amazon Rainforest with info about weather, seasons, and rainforest travel, we have made a guide for Amazon gateways. These gateways are the settlements positioned at the edge of the rainforest where you will begin your tour of wildlife-rich regions.

It’s worth mentioning that the best time to visit the Amazon Rainforest will depend on your personal preference. You may choose the drier months or you might prefer the wetter months when the forest is fruiting and flowering.

As an example, the high water months in the northern rainforest (coinciding with more rain) are better for seeing pink river dolphins, which tend to move to the main Amazon River over the low water months.

Because you can have a fantastic experience no matter when you travel, the main consideration for visiting the Amazon Rainforest is the lodge or cruise you pick, as your experience depends mainly on the quality of guides and service. We have collected hand-picked tours for each gateway to make sure you have the best experience.

You can message the lodge or cruise with your range of travel dates using the tour bubbles below. This will provide you with the most specific information suited to that particular tour and region.

The Amazon Rainforest gateways mentioned include:

Iquitos in northern Peru is the Peruvian gateway to the Amazon Rainforest. Iquitos is famed as being the largest city in the world unreachable by road. The best time to visit the Amazon near Iquitos depends largely on your interest. You can enjoy the top Iquitos Amazon River tours throughout the year as there are positive points no matter when you visit. 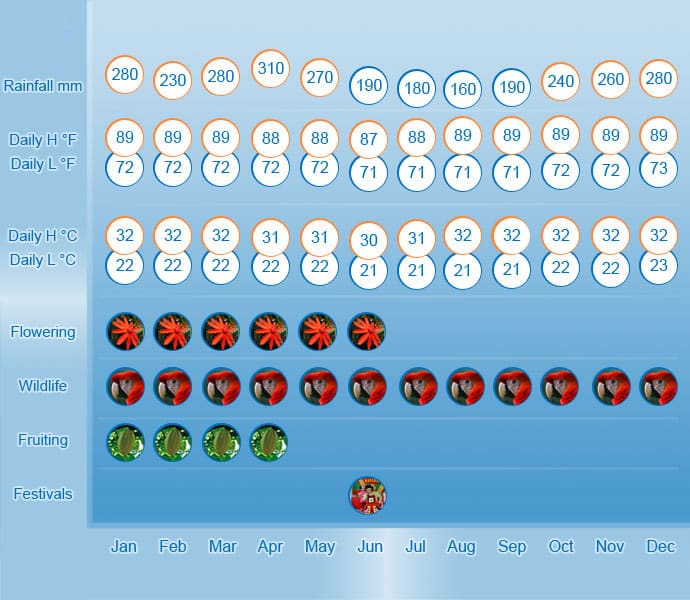 As with most tropical areas, when storm clouds form they usually occur in the afternoons dropping rain from the afternoon until sunrise. This wet weather often dries out by morning but can last a few days in the wetter season. Wet weather should be expected when deciding what to wear in the Amazon Rainforest.

The water can change up to 40 feet due to snow melt from the Andes and changes in rainfall.

Dependent on elevation, the high water season is generally better for canoeing in the forest and river cruises. Inaccessible areas of the Amazon are opened up when waters rise.

The low water season (May/June to October/November) is generally better for hiking into the forest, but note that if you’re visiting a higher elevation area there will be little difference.

Wildlife viewing is thought to be better during low water months. The reasoning behind this is that pools of terrestrial water shrink, which concentrates the wildlife dependent on smaller and fewer bodies of water. Chances of seeing aquatic wildlife increases as well, such as river otters, anaconda, caiman, arapaima, and river dolphins.

On the other hand, the high water season (October/November to May/June) is when many plants and trees drop their fruit. This fallen fruit attracts monkeys and other rainforest life drawn by abundant food.

Flowering plants make up the largest biodiversity component of tropical rainforests. In the Tamshiyacu Tahuayo reserve (near Iquitos) the time to go to the Amazon for seeing plants in bloom is from January to June.

Plants drop their fruit in the wet season, drawing an abundance of Amazonian wildlife for the seasonal buffet. In the Tamshiyacu Tahuayo Reserve, the months with the most fruit are between January and April.

The San Juan Festival is held every year from June 22 to June 25, at its peak on the 24th of June. This is the birthday of John the Baptist (San Juan Bautista), the patron saint of the Amazon. Visiting the festival will get you familiar with ‘juanes’ a local dish made with rice and egg cooked in leaves.

From the Tahuayo Lodge, you will explore the Amazon Rainforest’s wildlife-rich Tamshiyacu Tahuayo Reserve with a private guide on a

The Delfin II Luxury Amazon Cruise begins near Iquitos from the small town of Nauta. You will be transported in

Offering an on-board experience second to none, the Delfin I Luxury Cruise begins in Iquitos, north Peru, and takes you

Puerto Maldonado is the gateway to southern Peru’s ecological paradise and is a small town between Peru’s Manu National Park and the Tambopata Reserve. You can easily access Puerto Maldonado from Cusco. 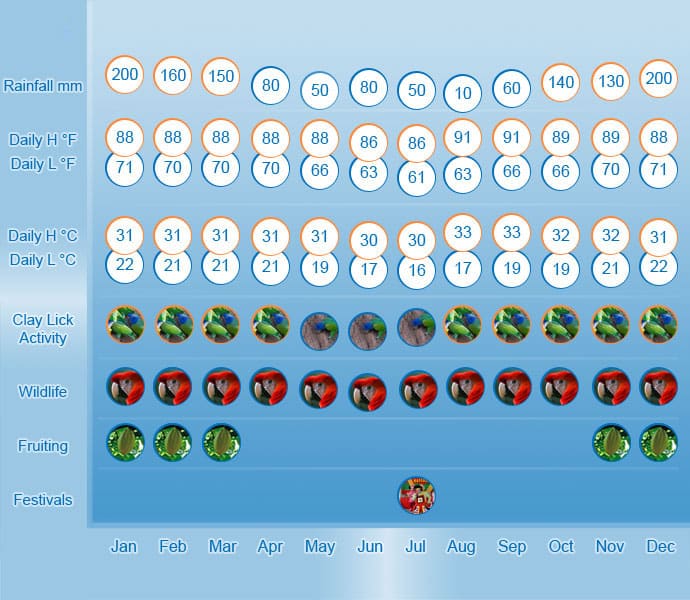 During the wetter months, rain often falls in the afternoon and is gone by morning, but can last a few days. When planning what to wear in the Amazon, remember to prepare for wet weather no matter when you visit.

Coming in from Argentina, cold fronts pushing up can greatly alter the usual warm climate. These periods are between May and September where daytime high temperature can get down to 9° C (50° F) and day time low temperature is 5° C (43° F). Plan on bringing some warm clothes for this time period, which can last for several days.

The Tambopata Reserve and Manu National Park are both home to macaw clay licks. These are areas of exposed clay, which the birds eat for the high salt content and to help detoxify unripe fruits and seeds they have eaten in the forest. The clay licks are most active in the wet season when there is abundant food and least active between April/May and early July.

The dry season means areas of terrestrial water shrink concentrating the wildlife around the remaining water bodies, but the wet season brings an abundant food source.

Rainforest trees fruit in the wet season (October/November – March/April). During this time you can see many different animals feeding on the seasonal buffet.

Puerto Maldonado celebrates its foundations on July 10th when in 1901 Don Juan Villalta led a rainforest expedition down the Tambopata River founding the settlement, which later became the capital of Madre de Dios.

There are a number of tour lodges near Puerto Maldonado where you can experience the incredibly diverse Tambopata Reserve and visit the many clay licks.

For experiencing the largest macaw clay lick, you should consider the Tambopata Research Center (considered one of the most remote lodges in the reserve). If you’re with a family, a good lodge is the Refugio Amazonas Lodge (home to the only children’s trail in the Amazon). For short visits, a good pick is the Posada Amazonas Lodge, which is owned by a native community and only 45 minutes from town. This is also a great option to see giant river otters.

Positioned in the middle of the wildlife-rich Tambopata National Reserve, near one of the largest macaw clay licks in the

The best end to a fantastic intrepid trip in Peru…!! Wish we had of spent more time there… Staff were

The site of the Incan Empire capital, Cusco is the major Peruvian tourist destination. Cusco is also the base city for trips to the magnificent Manu National Park and Peruvian cloud forest.

When it rains, it generally starts in the afternoons and clears by morning, but can last a few days in the wetter months. Plan on taking items for wet weather when deciding what to take to the Amazon Rainforest.

It should be noted that if you are heading to Manu National Park lowlands, temperature here is the more tropical 30 / 35°C (86 / 95°F) by day. Remember to prepare for wetter and hotter rainforest weather in addition to comparatively cold nights.

The Tambopata Reserve and Manu National Park are both home to macaw clay licks where birds come to detoxify food items they have eaten in the forest. The clay licks are most active in the wet season when there is abundant food and least active between April/May and early July.

The dry season means areas of terrestrial water shrink concentrating the wildlife around the remaining water bodies, but the wet season brings an abundant food source.

The festival of the Sun or Inti Raymi is celebrated on June 24th and is the main event in Cusco. The whole of Cusco join in celebrations centered around the re-enactment of Saqsaywaman’s Inca winter solstice festival. This is a very popular festival in Cusco and if this is your interest then this is also a great time to visit the Amazon.

El Coca is the gateway to experience Ecuador’s wildlife-rich Amazon Rainforest. Even the name Ecuador means equator in Spanish, which gives a clue to to the type of climate you can expect. The area offers year-long hot and humid temperature characteristic of tropical rainforest regions. 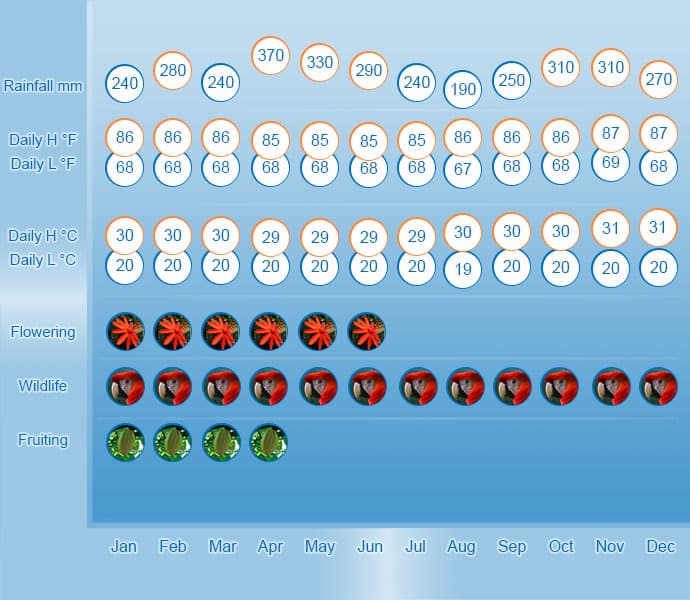 The wetter months are often between February to November with some patches of dry months. Of these, the months with the most rain are often April, May and June, which are also the coldest months of the year.

The Manatee Amazon River Cruise is a fantastic cruise for adventures into the wonderful Yasuni National Park, one of the

I wanted to let you know that we had an amazing experience at Le Selva! The service, accommodations, guides, tours,

Located in a 5000 acre private ecological reserve, Sacha Lodge provides a safe and comfortable base for you and your

Manaus is Brazil’s gateway to the Amazon jungle and was one of the Amazon River’s rubber boom cities. You can see traces of the rubber boom in city architecture, such as the Teatro Amazonas (Amazon Theatre). 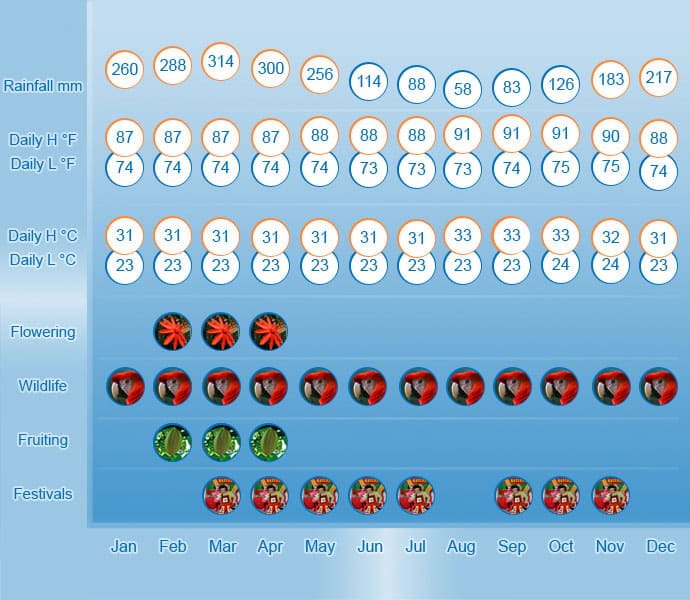 The rain generally falls in the afternoon and over night often clearing by morning, however, rain can fall for a few days over the wetter months. Remember to plan for wet weather when deciding what to take to the Amazon Rainforest.

The dry season (May/June – December/January) is often advised as the best time to visit rainforest areas for wildlife viewing as bodies of terrestrial water shrink, which concentrates the dependent wildlife. However, the wet season (December/January – May/June) is when most plants fruit and flower, which draws an assortment of fruit eating animals like monkeys and birds.

Many riverine plants flower in the wet season. If your interest is flowering plants, your best time to visit the Amazon from Manaus will be between February and April.

The wet season is when riverine plants drop their fruit, which attracts an assortment of rainforest animals. You are likely to see various monkeys and birds feeding on the plentiful food supply. Even in the wet season, it is rare for rain to last all day.

In June, Manaus celebrates the Festival Floclorico do Amazonas (Amazonas Folklore Festival). Here, you can expect an array of music and dancing ending in the St. Peter River Procession when hundreds of riverboats can be seen on the Rio Negro to honor the patron saint of fishermen.