Covering 350,470 hectares, the Anavilhanas National Park is especially known for the abundance of islands and there are around 400 in total. The park is home to many different Amazon Rainforest animals, including the rarely seen species like jaguar, giant anteater, and manatees, but also some more commonly encountered species such as giant river otters, river dolphins, and the colorful toucans and macaws.

The Anavilhanas National Park is located on the lower Rio Negro about 100 km upriver from Manaus city in northern Brazil and is easily accessible from the city by cruise vessel.

The protected area contains a large portion of flooded forest, many lakes, and different waterways. Because of its impressive size and flooded nature, the Central Amazon Ecological Corridor contains many aquatic animals and plants, such as the river dolphins already mentioned but also the largest array of electric fish on Earth and different threatened species, such as the Amazon manatees, black caiman and giant arapaima fish. The wildlife of the Anavilhanas is familiar with the regular flooding and the non-aquatic animals migrate to higher-ground or go deeper into the rainforest during the flooding events.

The Anavilhanas Archipelago with its hundreds of fascinating islands along the Rio Negro is then one of the largest river archipelagos worldwide. In its entirety, the Rio Negro is home to around 1,000 species of fish including around 10% endemic to the river, which are found nowhere else. 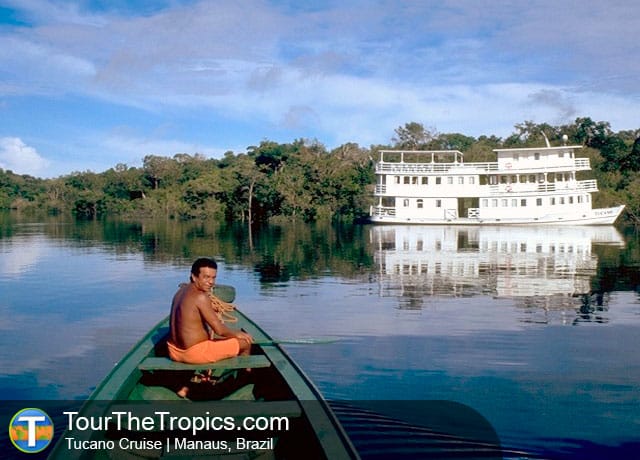 The islands were formed from the buildup of river sediment from the erosion of the Guyana Hills in the connected Rio Branco. Some of the islands are home to their own ecosystems of forest shrub-lands growing on nutrient-poor white-sand soil. These areas are home to endemic plant species but with low species-richness because of the poor nutrients.

The best time to visit the Anavilhanas National Park and the Rio Negro is similar to the best time to visit Manaus in general. The things to note are the high water and the wet and dry season. Although temperature remains relatively constant from month to month, the hottest time of year is August to November where temperatures can sometimes approach 37°C (99°F). Usually, temperature stays between a tropical 30 – 33°C (86 – 91°F) during the day and 23 – 24°C (73 – 75°F) at night. 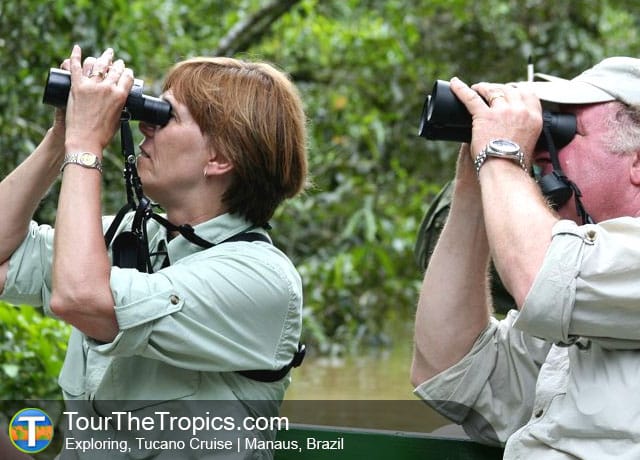 The high water season is from February/March until July/August, which is good time for a cruise as the waterways open up and the deeper rainforest areas become more accessible. This is also the best to enjoy different kayaking experiences, such as aboard the Tucano Expedition Cruise. The low water months are from July/August to February/March and are the best time for forest walks.

To explore the Anavilhanas National Park, the recommended vessel is the Tucano Amazon Cruise. This is an expedition cruise taking you deep within the reserve and up the Rio Negro. As an expedition cruise, you aren’t simply confined to the vessel but will explore the Amazon Rainforest on guided walking tours and skiff expeditions led by professional naturalist guides to find different monkeys, river dolphins, and Amazon birdlife. This is also one of the only cruises that takes you deep within the giant protected area of the Central Amazon Ecological Corridor. The cruise begins at the Hotel Tropical in Manaus, which is the largest city in the Amazon Rainforest.

Over 7 days aboard the Tucano Expedition Cruise, you will explore the rivers and rainforest with your naturalist guide on rainforest walks and skiff expeditions to spot different animals, plants, and beautiful scenery of the Rio Negro.

On the Tucano Expedition Cruise, you can choose a short 5 day or a longer 7 day cruise to explore the Rio Negro and Anavilhanas protected area. The Tucano is one of the only cruises to explore deep in the rainforest due to the vessels shallow hull construction. 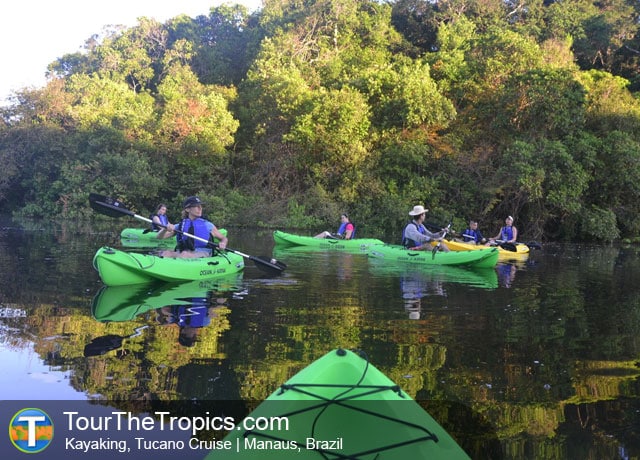 This is a great place for birdwatchers as over half of all the birds to see in the 6 million hectare Central Amazon Ecological Corridor can be seen in the Anavilhanas. To move silently over the water and between the flooded forest trees, it’s a great place to enjoy a kayaking experience deep in the rainforest, which you can enjoy aboard Tucano Cruises.

Aboard the Tucano Cruise, you will also visit the meeting of the waters where the dark Rio Negro meets the Amazon River and the two rivers run side by side for many miles because of differences in speed and density. As the rivers are different colors, it creates a visual spectacle and is one of the main day attractions from the city.

After your cruise to explore the protected area and Rio Negro rainforest, we will travel back to Manaus and the Hotel Tropical for your return journey home.