The Galapagos Islands have had a change of image since their first accidental discovery. Once described as worthless by a shipwrecked bishop in 1535, the islands are now regarded as an ecological paradise and one of the world’s top tourist destinations.

Adding to their popularity, there are some fantastic things to do on the Galapagos Islands. Not just home to incredible nature and wildlife, the Galapagos Islands offer some beautiful scenery, fantastic beaches, interesting trails, and a fascinating history of discovery filled with explorers, whalers, naturalists, and pirates.

The Galapagos Islands are an archipelago located off the coast of Ecuador. Home to some incredible wildlife, the Galapagos are famous for the many unique species that helped shape the theory of evolution. This was after Charles Darwin visited the islands over 150 years ago.

Let’s have a look at some of the fantastic things to do.

First, let’s have a look at the best things to do for the Galapagos Islands as a whole.

Now let’s have a look, island by island, at some of the best things to do on the Galapagos.

We will first introduce Santa Cruz, which is one of the main Galapagos Islands.

Things to do on • Santa Cruz Island

Santa Cruz Island is often the base for many Galapagos visitors and will likely be the first main island you will visit after you arrive at Baltra Island airport. Note that Baltra Island is reserved almost exclusively for the airport. After Isabela Island, Santa Cruz is the second largest island in the Galapagos archipelago. The island’s main town is called Puerto Ayora, which is where you can find many of the island’s activities.

Puerto Ayora will be your base while exploring Santa Cruz. Puerto Ayora is also home to the largest human population on the islands and there are some fantastic restaurants, souvenir shops, and hotels on the seafront. You will also spot many of the iconic Galapagos animals simply by walking around town. Some favorite areas for wildlife in Puerto Ayora include Charles Darwin Avenue and Fisherman’s Wharf.

Let’s have a look at some of the top things to do on Santa Cruz Island.

Things to do on • San Cristobal Island

Things to do on • Isabela Island

The largest island on the Galapagos archipelago, Isabela was a favorite island to anchor vessels for hundreds of years. Pirates, whalers, and explorers would regularly moor their vessels off Isabela. Most famously, Charles Darwin first set foot on Isabela and landed at Tagus Cove in 1835. The island was formed with the merging of six volcanoes and all of these except for one are still active. Notably, Isabela Island is home to more giant tortoises than other islands and the island’s geology and vegetation create habitats for abundant wildlife. This is also one of the best places to see whales on the Galapagos Islands.

Now let’s have a look at some of the top things to do on Isabela Island.

Things to do on • Fernandina Island

Fernandina Island is the third largest island in the archipelago after Isabela and Santa Cruz. The youngest of the Galapagos Islands, Fernandina itself is an active volcano and home to abundant wildlife. One of the top areas to see different animals is a narrow piece of land named Punta Espinoza, which we will mention below. As its a young island, there is little vegetation aside from mangroves and cactus, but as with other areas on the Galapagos, there are still some fantastic examples of animal life to be found. Many iconic species live both on and in the waters surrounding Fernandina.

Things to do on • Sombrero Chino Island

Sombrero Chino Island is a very small Galapagos Island and is named after its resemblance to a chinese hat. Only visitors on multi-day cruises are allowed to visit the island and you can enjoy a few sights of interest. The island provides fantastic snorkeling and diving opportunities to see a range of Galapagos wildlife. You can also enjoy a trail walk on the island after landing at the beautiful beach.

Things to do on • South Plaza Island

South Plaza Island is one of the lesser visited sites of the Galapagos Islands. Although a small island, the plants and animals are distinct from other islands. The short ground vegetation changes color depending on the season from green to orange and red. There is also a lot of wildlife to see on South Plaza Island, including one of the largest populations of sea lions, one of the largest populations of land iguanas, many different birds, and a diversity of colorful fish. You can also see rays, sharks, sea turtles, and penguins.

Let’s have a more in depth look at things to do on South Plaza Island.

Things to do on • Santa Fe Island

Santa Fe Island is a small island located in the middle of the Galapagos Islands. Although small, this is one of the oldest land masses on the archipelago. On the island, you can find forests of some of the largest species of Opuntia cactus. These provide food for the island’s population of iguanas. This is also the only place on the Galapagos to see the endemic Santa Fe land iguana.

Things to do on • Española Island 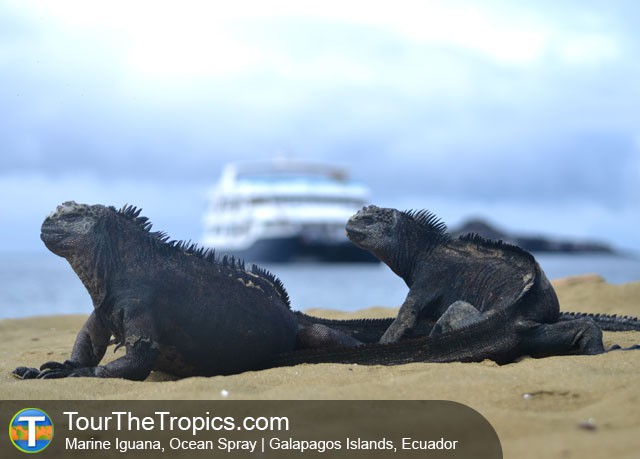 Española is found at the far southeast of the Galapagos archipelago and is one of the oldest of the Galapagos islands. The most loved wildlife sighting here are the waved albatross, as this is where the majority of the world’s population comes to breed. The island is also home to a large population of sea lions. Due to its isolation from other islands, there are a higher number of species here that are found nowhere else on the Galapagos.

Things to do on • Floreana Island

Floreana Island was of great importance to early whalers due to the famous post office that sailors would use to send mail to their loved ones. The island has some other fascinating human history, such as the disappearances of an Austrian baroness and several other island residents. In addition to the human history, you can enjoy some fantastic wildlife. Spot flamingoes, interesting plants, and many marine animals in the surrounding waters.

Things to do on • Bartholomew Island

Bartholomew Island was named after the lieutenant and principal surveyor of the HMS Beagle, Sir Bartholomew James Sulivan who was also a good friend of Charles Darwin.

Things to do on • Genovesa Island

Genovesa Island is found at the northeastern edge of the Galapagos Islands. The island is most famous among bird lovers for the abundance of species. Enjoy spotting red-footed boobies, Nazca boobies, frigatebirds, tropicbirds, mockingbirds, and the Darwin’s finches. You can also see many of the iconic marine iguanas sunning themselves on the rocks.

Things to do on • Santiago Island

Santiago Island has some fantastic areas to visit to enjoy beautiful beaches, pirate hideouts, lava fields, and incredible Galapagos wildlife in the surrounding waters. However, Santiago itself has been struggling with conservation issues from when people first set foot on the island. The removal of all goats, pigs, and donkeys from the island has helped with the recovery.

Things to do on • North Seymour Island

Things to do on • Marchena Island

Although Marchena Island has no visitor landing sites, the waters surrounding the island are excellent for snorkelling and diving.

Things to do on • Pinta Island

Pinta Island is another small Galapagos Island. However, Pinta was very well known because this was once the home of Lonesome George, the most famous animal of the Galapagos. Despite Pinta Island having no visitor sites, you can see a diversity of wildlife in the surrounding water. Spot marine iguanas, fur seals, and different fish.

Things to do on • Pinzón Island

Pinzón Island is located in the middle of the Galapagos archipelago and there are no facilities for visitors. In fact, you will need to acquire a special permit to set foot on the island. However, there are some fantastic dive sites nearby.

Things to do on • Rábida Island

Rábida Island is a fantastic island for wildlife. Although one of the smaller Galapagos Islands, you can see a high diversity of birds including pelicans, penguins, Darwin’s finches, and more. You can also spot the other iconic wildlife, such as sea lions, marine iguanas, and sea turtles.

Things to do on • Wolf Island

Wolf Island is another of the Galapagos Islands off limits to land visits. However, you can visit some fascinating dive sites to see different marine life.