We will first talk a little about these magnificent animals, how tours to see gorillas are helping protect wild populations, and then mention some of the best tours to see gorillas in Uganda and Rwanda. The tours below have been selected so you can see these amazing animals in the wild while enjoying exceptional service and accommodation.

First discovered in 1902 in the Virunga mountains of the Uganda / Rwanda region, Mountain Gorillas have fascinated people for over 100 years. Since this time, gorillas have attracted many people back to Africa to see these mysterious and noble animals.

It wasn’t long after their discovery that their human-like eyes drew compassion and they were first protected from hunting by the formation of protected areas, first protected in the Virunga National Park. Unfortunately, war, poaching, and the seemingly relentless expansion of human populations is a constant threat to push these creatures into extinction, and their remaining strongholds of protection are constantly being whittled away.

You can identify the mountain gorillas as they live in a colder climate at a higher altitude and so have thicker and longer fur adapted to these conditions. The larger of the gorillas are the eastern lowland gorillas, and both of these subspecies can be found in the Uganda and Rwanda region, such as the Virunga Mountains, and the mountain gorillas can also be found in the Bwindi Forest.

As a fascinating point of interest, humans are more closely related to chimpanzees than chimpanzees are to gorillas. And differing from their chimpanzee cousins, gorillas live exclusively on the ground and are strictly vegetarian. They feed on different shoots, roots, pulp, fruit and tree bark.

Gorillas live in groups of about 7 or 12 with the most powerful silverback, usually the largest and oldest, leading a family of younger males and females. The silverback makes the decisions of when to move, wake, eat and rest. As a protector, the silverback is the most aggressive and gives warning displays when feeling his group is threatened.

With only a few hundred mountain gorillas left, and as one of our closest ancestors, your would assume their survival would be a priority for everyone, ahead of mineral deposits and farmland, but this is not the case. The people living in these areas often consider gorillas of importance in conservation, but with little else to utilise for feeding their families, they turn to the forest. 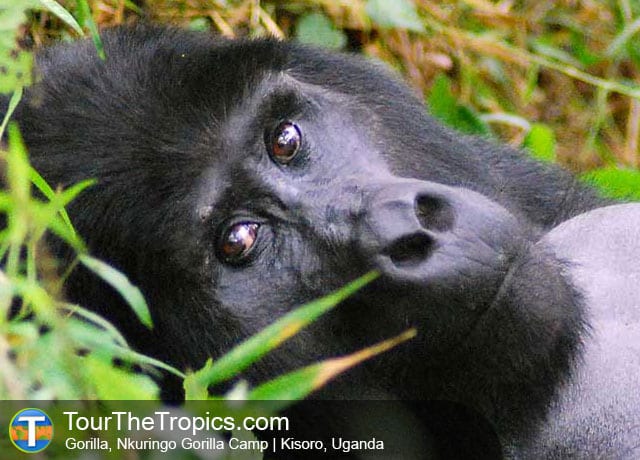 The need for a monetary value on the forest has shone a light on tourism, as a way to provide much needed economy to local communities while protecting the gorilla populations and surrounding rainforest. This has not been without painful lessons, however, as because of their genetic similarity to humans, in years passed, tourists would unknowingly pass on flus, colds and other illnesses to the gorillas, often with tragic consequences.

However, now with veterinarians on standby constantly caring and monitoring the gorillas, tourists have become their saviors. The potential negative effects are outweighed by the benefits tourism provides for gorilla protection. People have often concluded that if it wasn’t for tours to see the gorillas, they would have all but disappeared.

Park guards and rangers constantly check on the gorillas welfare. These are usually the same guards who have looked over the gorillas since birth: tracking positions, well-being, and removing snares and other hunting equipment left by poachers.

The constant veterinarians, researchers, park guards and rangers cost money, however, which the countries where the gorillas are found do not have. Combined with injecting foreign revenue into the local economy, and giving governments a financial reason to protect gorillas, tourism has been valuable for gorilla survival and on which their future very much depends. 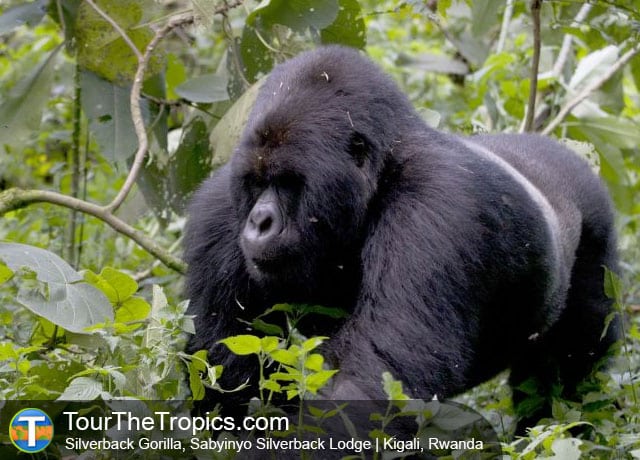 Learned from past mistakes, tourism must be carefully controlled to keep balance and maintain tourism as a force for good in gorilla conservation. Because of this, only a small number of tourists are allowed to see the gorillas each day, and each tourist must have an official permit. Because only a small number of tourists can visit the gorillas and because of the price of conservation, these permits are comparably high to viewing other animals, and at the time of writing a permit costs around US$600. But given the attraction of seeing gorillas in the wild, these permits get quickly sold out and we advise booking your accommodation, tour and permit well in advance. Using the below contact bubbles, you have direct contact to the respective lodges and tours.

Bwindi Impenetrable National Park is located in southwest Uganda and is a fascinating forest to see. Large bamboo stands are dispersed within the forest trees, which is why the locals named the forest ‘Bwindi’ meaning impenetrable. Classified as one of the world’s most diverse areas, and the richest forest in Africa, many different animals and plants live in the forest, from the famous Mountain Gorillas and hundred other mammals, to the 200 different butterflies. The mountain gorillas that live in Bwindi are half of the remaining population. A great lodge to base yourself from is the Nkrugino Gorilla Lodge.

Based from the comfortable Nkuringo Gorilla Lodge, enjoy a 4-day Gorilla Trekking Tour to see the incredible mountain gorillas. Visit the wildlife-rich Bwindi Impenetrable Forest in Uganda. Explore the mountainous landscape at the far southwestern

From the comfortable Nkuringo Gorilla Lodge, enjoy the 5-Day Gorilla Trekking Tour to visit two groups of Bwindi gorillas. These gorllla groups live in the incredible Bwindi Impenetrable Forest of southern Uganda. The forest is

The Virunga Mountain National Park is a UNESCO-designated World Heritage Site. This was the first national park in Africa and was established to protect the habitat of the mountain gorillas, which were discovered 20 years previous. The Virunga National Park is widely regarded because of its incredible number and diversity of animals and plants.

The mountain gorillas are the stars of the park and although now critically endangered, extensive work in tourism and conservation have seen populations stabilizing and even increasing. As well as the gorillas, you can find other interesting animals in the Virungas, such as forest elephants, buffaloes and many birds found nowhere else on Earth.