Rwanda’s section of the Virunga Mountains contains an impressive assemblage of wildlife, from the famous mountain gorillas to an abundance of beautiful birds. Virunga is from the Rwandan word for volcano and the Rwandan section is protected within the aptly named Volcanoes National Park (Parc National des Volcans).

The entire Virunga mountain range is composed of eight volcanoes, with Mount Karisimbi, the highest volcano, Visoke, the only active volcano in the Rwandan range, Muhabura, Gahinga, and Sabinyo having significant portions in Rwanda and the Volcanoes National Park.

The Virungas are located in the north-west of the country and along with the Nyungwe Forest represent Rwanda’s best areas for wildlife watching. The volcanoes are home to many different plants and animals. Mainly covered with bamboo and rainforest, the mountain range houses around 300 bird species. The most birds are found around the Sabinyo Volcano, which marks the border between Uganda, the Congo, and Rwanda. This eastern section of the mountain range also contains more large mammals and plants.

You can recognise Sabinyo by its serrated summit, which earnt the mountain the nickname of Old Man’s Teeth from Sabinyo, the Rwandan word for tooth. The other mountains in the range have the usual coned volcano shape.

For a little history, the Volcanoes National Park was the first protected area in Africa, designated to protect the home of the then recently discovered mountain gorillas, the largest of the great apes. This was also the base of the famous American naturalist Dian Fossey who studied the gorillas and brought their need for conservation to international attention, with the famous Gorillas in the Mist movie based on her life and work. 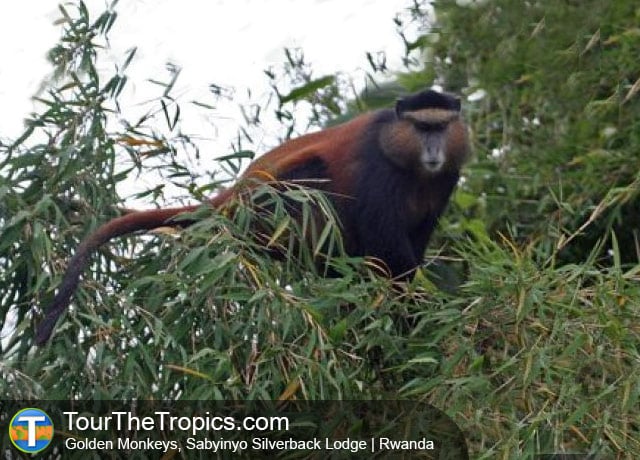 Aside from the gorillas, other favorite wildlife in the area are the golden monkeys, which are often a favored highlight. These rare monkeys are a local subspecies of the reasonably common blue monkeys and are only found in the Volcanoes National Park area. We often see these monkeys leaping between bamboo stems and apparently playing on the forest floor. There are two habituated groups of golden monkeys with one group at the foot of Sabinyo containing 80 to 100 individuals. But the main attraction for many are our closely related cousins, the mountain gorillas.

Gorillas of the Volcanoes National Park, the Rwandan Virungas

There are ten habituated mountain gorilla groups accessible to tourists and tourism has been highly important in their survival. The gorillas attract around 20,000 tourists each year and people booking tours directly and indirectly helps fund the conservation and protection of their home. After purchasing a permit for your gorilla visit, you will trek through the forest to enjoy watching and learning about these magnificent animals with your knowledgeable guide.

The Virunga population of mountain gorillas live in groups of about 20 different animals with usually only one mature male, or silverback. There is diversity in the groups with some occasionally consisting entirely of males or containing several males. The gorilla groups then merge and exchange individuals on an ongoing basis. 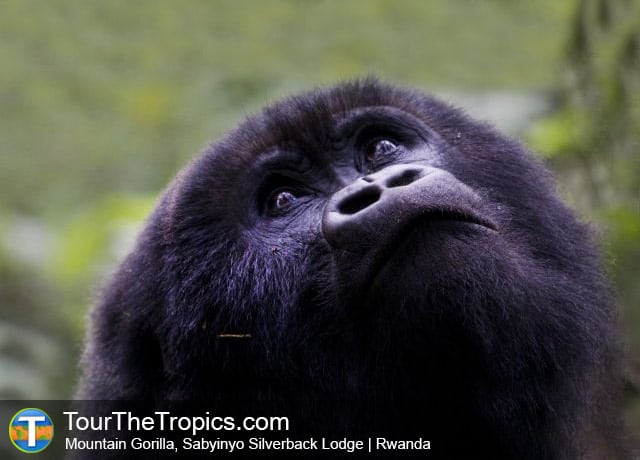 The mountain gorillas are folivores and feed on plant shoots, but they will eat fruits, flowers, roots, and occasionally will eat insects and snails. Around 90% of their diet comes from leaves, stems and shoots. They feed on a diversity of plants and the Virunga population has been recorded eating around 150 different plant species with an apparent preference for bamboo.

The mountain gorillas have been through many changes in their population size, with possibly the largest change resulting from early deforestation. At one stage the mountain gorillas were almost certainly heading for extinction, as their population was plummeting since the 1950s with 500 individuals to only 250 in 1981. Since this time, and with the onset of tourism, the gorilla population has been recovering to now include around 500 individuals in the Virunga Mountains.

The African Great Lakes & other attractions

As well as the fantastic scenery, mountain gorillas and wildlife of the Virunga Mountains, the surroundings are dotted with beautiful lakes, as this is also the location of Africa’s Great Lakes region.

You can visit the twin lakes of Lake Bulera and Lake Ruhondo for stunning landscapes and dark blue waters. And you can also enjoy a cruise on the calm waters of Lake Bulera to see the mystical surroundings, while watching the locals fish the lake with traditional dugout canoes. The view of the Virungas from the lake is remarkable. If you would like a bit more adventure, you can also combine the cruise with a 3 hour hike to Russumo Falls, following the deep and peaceful scenic valley to the two impressive waterfalls. 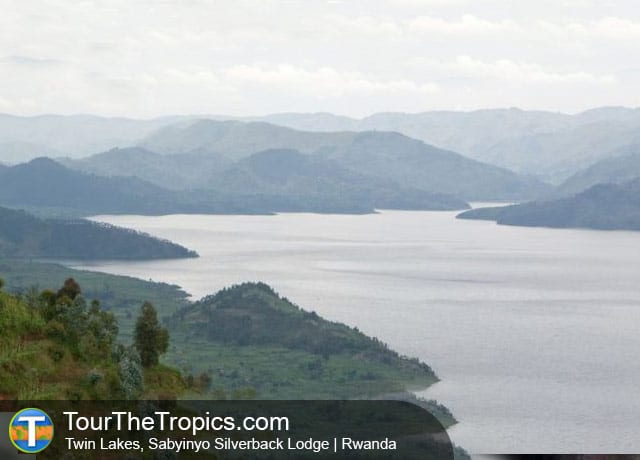 Within the Volcanoes National Park, you can walk to Lake Ngezi at the foot of Mount Visoke, which is the shortest walk in the protected area. This takes around three hours through rainforest vegetation until emerging at the small scenic lake nestled in a volcanic depression.

If hiking is an interest, not only can you walk to fantastic lakes but also climb the volcanoes themselves, such as Visoke, Gahinga, and Muhabura, some with interesting features like volcanic caves.

Other fantastic forest in the area include the protected Nyungwe Forest National Park where you can see different primate species, including chimpanzees, and the Buhanga Sacred Forest. The Buhanga Sacred Forest is a small forest of at only 31 hectares, but is of high ecological importance. The forest contains a high diversity of plants, birds and butterflies.

To visit the Volcanoes National Park and mountain gorillas, our recommended experience is the fantastic Sabyinyo Silverback Lodge. Here you can enjoy gorilla trekking, visits to the see the golden monkeys, volcano and lake hikes, a lake cruise, bird watching and cultural tours. Not to mention relaxing in the comfortable lodge, enjoying delicious food, and gazing out over the fantastic views of the Virunga Mountains.