You may not realise it, but tropical forests contain the bulk of all life on Earth. These areas cover just 7% of the Earth’s surface but contain a staggering 50% of all the world’s life. The Amazon is the world’s largest tropical forest with the majority occurring in Brazil. And with over 40% of its area protected, and the most biodiverse country on Earth for land-living life, Brazil is a fantastic place to visit if you have even the smallest interest in nature, animals and plants.

Astonishing naturalists, explorers and tourists alike for centuries, Brazil’s Amazon is sure to impress and to leave long-lasting memories for you and your family. This tropical country is home to breathtaking numbers of animals. You can find 1,700 different birds, 695 different amphibians, 578 different mammals, and 651 reptiles species, not to mention the fifty thousand different plants. The vast majority of these live in Brazil’s Amazon Rainforest.

As one of history’s most famous nature lovers wrote, “Here I first saw a tropical forest in all its sublime grandeur… Delight itself is a weak term to express the dealings of a naturalist who, for the first time, has wandered by himself into the Brazilian rainforest.” – Charles Darwin 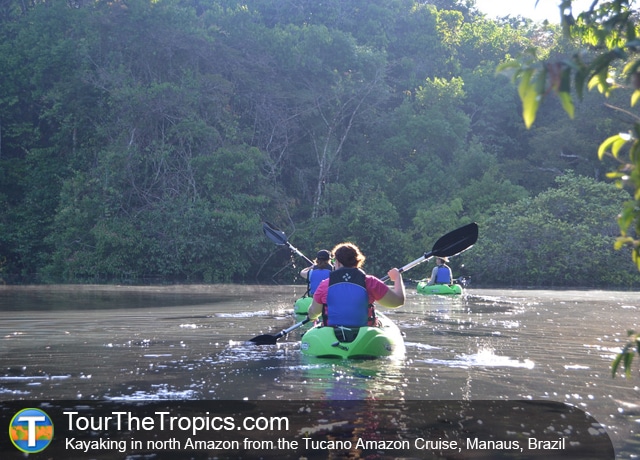 The Brazilian Amazon contains the two largest cities in the rainforest: Manaus and Belem. Because of their size, they are often the choice as gateways to the Amazon Rainforest. These cities are also port cities of the Amazon River, which changes its name here to be known as the Rio Solimões. From Manaus, you can explore the Amazon Rainforest & River to see fascinating forest and wildlife on tours, such as Nat Geo’s top rated Tucano Amazon Cruise on either 7, 6 or 4 night trips. However, the rainforest doesn’t end at the edges of the Amazon River and instead stretches far down Brazil covering around half of the entire South American continent.

While the majority of people think of Amazon River Cruises in northern Amazon when planning an Amazon adventure, the southern Brazilian Amazon at the lower reaches of the river’s tributaries is a worthwhile yet lesser ventured part of this fantastic forest.

One of the most studied areas in terms of animals and plants in the southern Brazilian Amazon is the town of Alta Floresta in Matto Grosso state. From here, you can enjoy incredible Amazon Rainforest tours from the highly acclaimed Cristalino Lodge to see Amazon animals and plants. You can find over 30% of Brazilian birds in the area making the lodge a first choice for birders and nature lovers.

The Cristalino Foundation have set up a lodge and private reserve of 28,167 acres (44 square miles) covered by primary and lush rainforest including many different habitats. The area is divided into four areas used for either tourism, conservation, research and monitoring. The reserve where the Cristalino Lodge is situated also borders the 184,900 hectare Cristalino State Park providing sanctuary for animals and plants.

Enjoy walks in the Cristalino Lodge’s private reserve and along the Cristalino River. The river is an area hanging on to its forests thanks to tourism, while other areas of the Brazilian Amazon are being destroyed for cattle ranching.

The area has a high biodiversity, not just because we are in the Amazon Rainforest, which is the largest container of life on Earth, but also because we are at the meeting point of three contrasting ecosystems: the Cerrado, Pantanal and Amazon. Many species that live in the other bioomes can be seen wandering around our area. We also see a large number of animals not found anywhere else on Earth because of the barrier effect of nearby rivers. 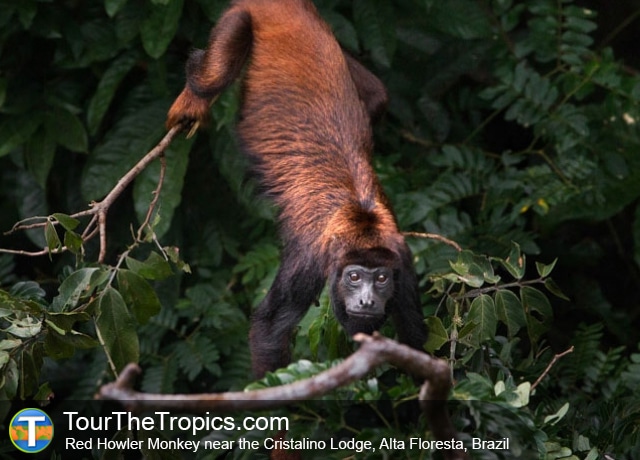 The Amazonian mammals you can find at the lodge include all the Amazon’s favorites, including Tapir, Capybara, Giant Otters, Neotropical Otters, and Monkeys e.g. spider monkeys, howler monkeys, capuchin monkeys, marmosets, tamarins and sakis. You may also catch sight of some rarer mammals like tamandua anteaters, giant anteaters, tayra and shy three-toed sloths. Although living in the area, seeing the big cats of Jaguar and Puma is a chance event enjoyed about once each year.

To see animals like the famous and strange looking Brazilian Tapir, you should time your Cristalino Lodge tour for between July and October, as this is when we are more likely to find tapir and capybara along the river edges.

Around the Cristalino Lodge you can find a variety of trails winding their way near the rivers and through the rainforest. These have been carefully positioned for you to make the most of the forest and wildlife watching opportunities. They are not long trails and most are between 2 km and 4 km (1.2 – 2.4 mi).

To receive a free itinerary and options, you can contact the Cristalino Lodge directly using the contact bubble below.

About the Author: Ash Card is a frequent visitor to the Amazon and has a passion for helping visitors get the best experiences from tropical destinations. Ash has interests including tropical destinations, rainforests and wildlife. Feel free to contact Ash for tour help in the Amazon. When not helping tourists with tours and info, Ash can be found salsa-ing the night away or posing near waterfalls.
Share This Article...

x
x
Share This Article...