To make the most of your safari in South Africa, here’s a guide to the Shamwari Game Reserve and the Kruger National Park. We will mention reserve summaries, activities, wildlife, and differences.

To start with, both these protected areas are visited from two different base cities…

At 2 million hectares, Kruger National Park is one of the largest protected areas in Africa. It is also the most popular area for a safari with over 1 million visitors each year.

The Shamwari Game Reserve is on the opposite end of the spectrum at a modest 25,000 hectares. Shamwari is a private game reserve and offers a premium safari experience. From the different luxury-class lodges, it also offers a more exclusive safari.

Now, let’s look at the history and general wildlife of these fantastic places.

Protected to stop uncontrolled hunting, an area of Kruger was first established in 1898. Kruger later became South Africa’s first national park in 1926. This now forms part of the UNESCO Kruger to Canyons Biosphere Reserve, which was established because of the park’s ecological significance among other reasons.

Kruger National Park includes all the Big 5 animals visitors enjoy seeing on safari. These include the lions, Cape buffalo, elephants, rhino, and leopards. Given its vast size, there are many more species to find, which we will mention in more detail further down. But note that Kruger contains more species of large mammal than any other game reserve in Africa.

Shamwari Game Reserve also started from humble beginnings as agricultural land. Throughout the 19th Century, South African settlers reduced wildlife through hunting and farming. Shamwari was established in 1990 to recover the wildlife that once existed on the Eastern Cape. Nowadays, Shamwari Game Reserve contains the highest concentration of animals on the Eastern and Southern Cape. This includes all members of the Big 5, which are the lions, Cape buffalo, leopards, elephants, and both white and black rhino.

Aside from the size, one of the other main differences is accommodation.

The Shamwari Game Reserve is a private reserve and offers only luxury accommodation. But there are several luxury lodges for the Shamwari Reserve to choose from. Each offers its own unique charm.

There are luxury lodges suitable for families with young children. Some have interconnecting rooms and a child-friendly swimming pool. There’s an open-plan tented lodge, a luxury explorer camp, and a manor house. You also have the Lobengula Lodge, which is a private villa booked for exclusive use. Lobengula can accommodate 12 people and comes with lodge staff, guides and chefs. To read more about these, you can see our guide to Shamwari Reserve accommodation and lodges.

To name two Shamwari lodges, you have the Eagles Crag Lodge and Sarili Lodge. The Eagles Crag Lodge is the premium lodge in the Shamwari Game Reserve. This sits in a more forested part of the environment. Offering fantastic views of the forest and rock faces, you can see eagles flying high above the area. Besides luxurious suites, enjoy the spa area for a hydro bath, steam room, and a sauna.

Port Elizabeth, South Africa, Africa
Price per person from $
The Eagles Crag Lodge is the epitome of luxury in the Shamwari Game Reserve with breathtaking views, More info
Book now

For families with young children, we recommend the Shamwari Reserve’s Sarili Lodge. This offers incredible views of the savanna habitat and Bushman’s River. Enjoy large terraces with indoor and outdoor dining, luxurious rooms, and a heated swimming pool. The pool has a shallow area for children. Aside from these, there are several other luxury lodges for the Shamwari Game Reserve to choose from.

In the Shamwari Game Reserve, you can enjoy daily morning and evening game drives at the best time for wildlife viewing. This gives you time to enjoy other activities in the reserve. You can then enjoy your suite before your next safari or visit the different sanctuaries, which we will mention later. 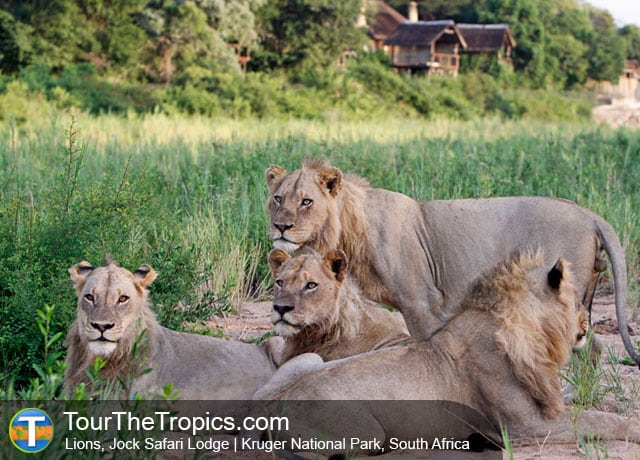 Johannesburg, South Africa
Price per person from $
Jock Safari Lodge is situated where the Mitomeni and Biyamiti Rivers flow as one in the south-wester More info
Book now

The Jock Safari Lodge has a main area and 12 individually thatched rooms. Each offer incredible views into the national park. You can even spot the Big 5 from your suite. From the lodge, enjoy different game drives and walking safaris to explore this incredible protected area. Guided game drives head out to find lions, elephants, leopards, rhino, giraffes and more. After your safari, head back to Jock for a massage or relaxation treatment in the Jock Safari Lodge Spa. For another similar lodge, you can also choose the Fitzpatrick’s Lodge at Jock.

Johannesburg, South Africa, Africa
Price per person from $
Fitzpatrick’s Lodge at Jock is at the edge of Biyamiti in Kruger National Park. The lodge offers per More info
Book now

As for the differences and similarities with the wildlife and habitat in both protected areas.

As mentioned further up, both Shamwari Game Reserve and Kruger National Park contain the Big 5. These are the lions, leopards, white and black rhino, elephants, and Cape buffalo. Both areas also include black wildebeest and the other main species visitors want to see. 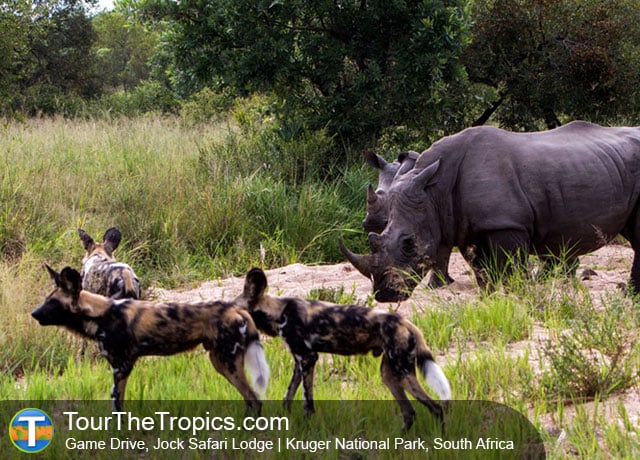 Kruger supports the most species because of its larger size, including 147 different mammals. The park also includes one of the only groups of endangered African wild dog in South Africa. Other animals to find are hippos, zebra, giraffe, warthogs, hyenas, baboons, vervet monkeys, and pangolins. You will also spot many antelope and buffalo species. These include eland, kudu, nyala, blue wildebeest, and impala.

The habitat zones of the Shamwari Reserve can be roughly separated into savanna habitat, thicket, and forest. The most common animals to spot in the Shamwari Game Reserve are the white rhinos, elephants, giraffes, zebra, kudu, springbok, warthogs, lions, and cheetah.

On Shamwari Reserve safaris, the majority of wildlife watching is spent on elephants, lions, rhinos, giraffes, cheetah, and the elusive leopards. Other animals are then spotted between these stars of the reserve.

The Shamwari Reserve supports 56 different mammals, including the favorites such as the above species, but also black wildebeest, buffalo, and both white and black rhinoceros. To spot the animals in the Shamwari Reserve, you can enjoy exhilarating guided game-drives from the Shamwari luxury lodges.

There are also different activity options in Shamwari Reserve and Kruger National Park.

The activities are more varied in Kruger National Park because of its status and size. Besides guided game drives, enjoy self-drive tours with or without a hop-on guide, walking safaris, mountain biking, and horse riding. From the Jock Safari Lodge, you can enjoy game drives, nature walks, the spa, and even golf.

Aside from the game drives to spot the large mammals, birdwatching is a great activity in both the Kruger National Park and Shamwari Reserve. On tours from Kruger’s Jock Safari Lodge, enjoy spotting many interesting species in the surround habitat. See martial eagles, steppe buzzards, fish eagles, and tawny eagles. From the comfort of Jock Safari Lodge itself, you can enjoy spotting hornbills, woodpeckers, shrikes, and more. 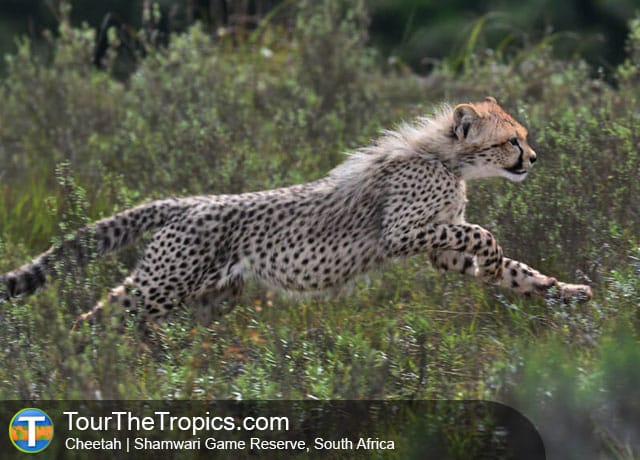 From luxury lodges in Shamwari Reserve, enjoy twice-daily game drives and bird watching tours. From Shamwari Explorer Camp, you can also enjoy walking safaris. This can be added before or after your lodge stay.

The Shamwari Game Reserve also includes some different information centres, rehabilitation centres, and sanctuaries. These include the Born Free Big Cat Rescue and Education Centres, Ian Player Rhino Awareness Centre, and Wildlife Rehabilitation Centre. You can enjoy a tour of these centres from your stay at the different Shamwari Game Reserve lodges.

In summary, both the Shamwari Game Reserve and the Kruger National Park offer a fantastic place for a safari. Your choice will depend on what you want from the experience. If you want some more comfort, you may choose the Shamwari Reserve. If you want more hiking and walking opportunities, you may choose the Kruger National Park. You can spot the big wildlife most visitors want to see in both areas, but if you have some specific animals or plants in mind, we recommend contacting the different lodges to ask. Also, don’t forget that the Shamwari Reserve offers the Shamwari Explorer Camp for a more comfortable walking and camping experience.