The Shamwari Nature Reserve is an award-winning private reserve in South Africa. The reserve is located about 75 km from Port Elizabeth.

The Shamwari Reserve & Shamwari Reserve lodges are consistently voted leaders in conservation and eco-lodge operation. The reserve has been featured on nature programs, including Animal Planet for the show ‘Shamwari: A wild life.’

The reserve covers around 25,000 hectares on South Africa’s Eastern Cape. Shamwari is a large private game reserve including savanna, thicket, and woodland habitats. A favorite tourist destination for a luxury safari, you can find all the Big 5 animals within the reserve. These include the popular sightings of lions, leopards, elephants, rhino, and Cape buffalo. In addition to these, there are a lot of other animals, which we will mention later. 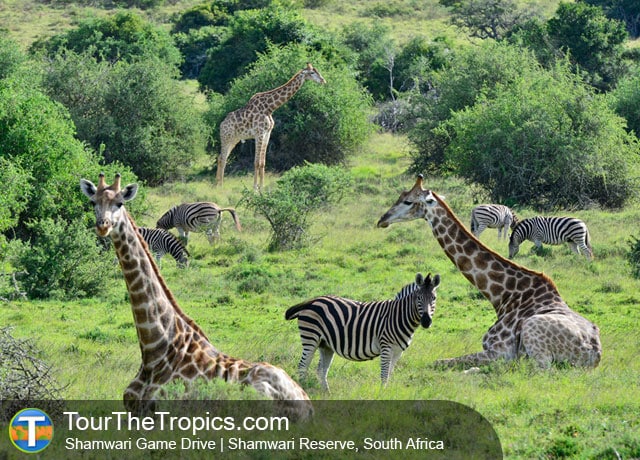 The Shamwari Reserve has helped recovered the concentration of big game animals that once existed on the eastern Cape. This was all done in just 25 years. In the 19th century, South African settlers reduced the wildlife through hunting and farming. In 1990, the Shamwari Reserve was founded to recover the animals that were lost during this time. The Shamwari Nature Reserve now protects the highest concentration of animals on the Eastern and Southern Cape.

You will enjoy safaris from the luxury lodges & explorer camps for Shamwari Reserve. Enjoy twice-daily game drives to observe reserve wildlife. Two different lodges to consider include Eagles Crag Lodge and Bayethe Lodge. These offer the ultimate in scenery, style and comfort. You can also choose luxury family lodges of the Riverdine Family Lodge and Sarili Lodge. For a fantastic safari or add-on experience to Shamwari lodges, you also have Shamwari Explorer Camp. This offers a more immersive experience on a walking safari. 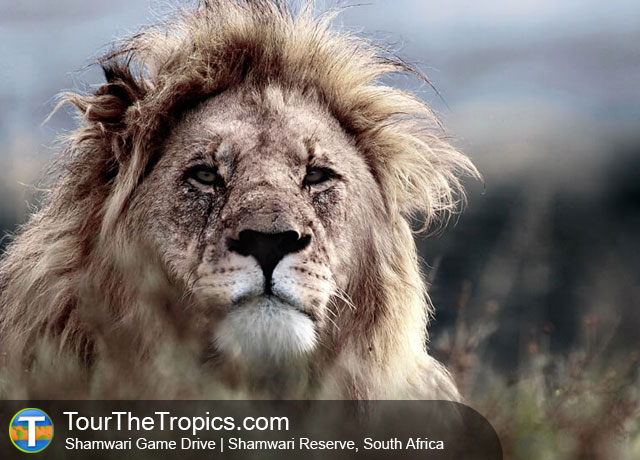 The different habitats of the Shamwari Reserve support a variety of animals. Enjoy spotting the Big 5 already mentioned, but also some of the other many animals. The reserve is home to both white and black rhino, hippos in the riverine areas, and African elephants. You can also spot giraffes, Cape buffalo, antelopes and more. The big cats you can find include the lions, leopards and cheetah. The Shamwari Reserve is also home to many interesting birds. These include pale chanting goshawks, booted eagles, black shouldered kites, and secretary birds.

Here we will mention just two of the lodges to choose from and the explorer camp. To see the other different options, you can see our guide to the Shamwari Game Reserve Lodges. There are camp-style lodges, a manor house, family lodges, and even an exclusive villa. The exclusive villa option is the Lobengula Lodge in the north of the reserve. To feature two lodges, you have the Bayethe Tented Lodge and Riverdine Family Lodge. 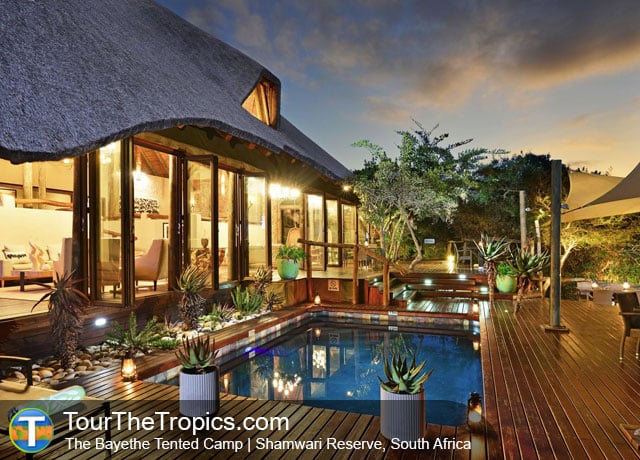 The Bayethe Tented Lodge offers a more open design with fantastic views. The lodge was inspired by immersive camping tours like Shamwari Explorer Camp. But the lodge then provides all the comforts of a 5-star hotel (plus a few extras).

The lodge is composed of 12 detached tents offering both superior and luxury options. Both options are airconditioned with an ensuite and plunge pool. The superior suites feature a private deck and fireplace. The lodge offers a relaxation retreat, central lounge, and both indoor and outdoor dining.

The Riverdine Family Lodge is a great choice for families. The lodge offers large decks and beautiful views. The lodge was designed to offer luxury accommodation for a family safari in Shamwari Reserve. The lodge offers 9 luxury inter-leading rooms, which can accommodate two adults sharing with one child. Six of the suites have twin beds and three luxury suites have an extra sleeper couch.

The suites have air conditioning, ensuite bathrooms, private patio, and WiFi. The lodge offers a rim-flow swimming pool with shallow area for children and supervised play room & jungle gym. You also have the boma overlooking the Bushmans River.

As another experience, you can choose the Shamwari Explorer Camp. Over two or three days, enjoy a walking safari in the Shamwari Reserve to fully immerse yourself in the African environment. It’s a great feeling to approach some of the wildlife on foot. Your experienced guide is always on hand to teach you about the animals and the history of the region. As evening comes, enjoy delicious food around a campfire and observe the sunset with a sundowner hearing stories of the African bush.

The Shamwari Reserve supports 56 different mammals. The most common animals to spot are the white rhinos, elephants, giraffes, zebra, kudu, springbok, warthogs, lions, and cheetah. Note that the majority of time observing animals tends to be on visitor favorites. These include the elephants, lions, rhinos, giraffes, cheetah, and the elusive leopards. The other species can be spotted between these stars of the reserve.

As an added feature of the Shamwari Reserve, there are some different sanctuaries to visit. These include the Ian Player Rhino Awareness Centre, Shamwari Wildlife Rehabilitation Centre, and the Born Free Big Cat Sanctuary.

Rhinos are facing increasing pressure from hunting, habitat destruction, and the rhino horn trade. The center was established in 2012 to help educate the public on the pressures facing rhinos in the wild. 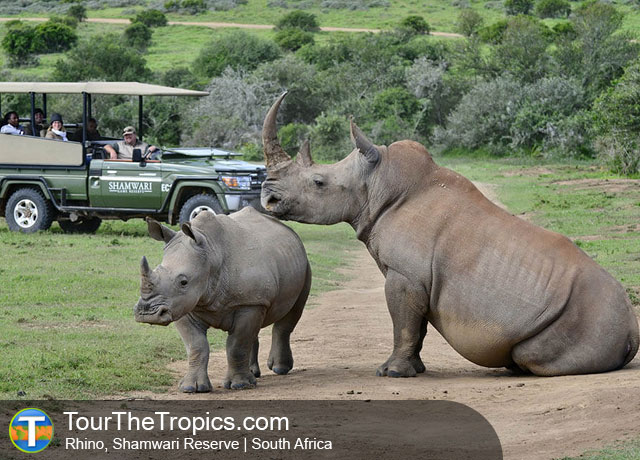 After enjoying the game drives and bird watching tours, you can also visit this eye-opening rhino facility. See the animals cared for at the reserve and have a guided tour of the center.

Rhino were once widespread across all African savannas and their numbers were decimated in the 19th century. Black rhino were one of the worst affected. Black rhino numbered 100,000 in the early 20th century and were reduced to less than 2,500 individuals, bordering on extinction. Currently, numbers have been helped up to around 5,000 individuals. This is still just a fraction of their earlier population.

The Wilderness Foundation has created a unique display at the Ian Player Rhino Awareness Centre to highlight the current rhino situation.

The Big Cat Rescue and Education Centers in the Shamwari Nature Reserve are operated with the Born Free Foundation. Originally, the mission of Born Free was to educate the public about wild cats kept in captivity throughout the world. They have grown to now rescue lions and leopards from captivity and help other species worldwide.

The sanctuaries were founded by Virginia McKenna and Bill Travers with the motto of keeping wildlife in the wild. There are three institutions you can visit in the Shamwari Reserve. These include the Julie Ward Center, Jean Byrd Center, and the Education Program. This helps schools and colleges with the aim of conservation through education. You can visit the sanctuaries from the Shamwari Reserve lodges.

Within the Shamwari Reserve, you can also find the Shamwari Wildlife Rehabilitation Center. This helps rescue and rehabilitate sick, injured, abandoned and orphaned animals. 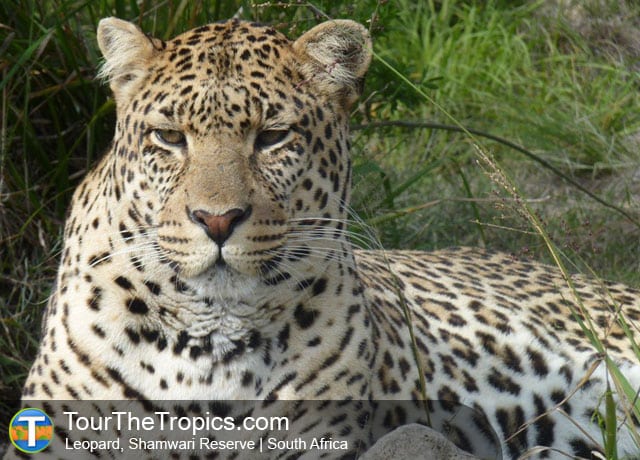 To summarise, the Shamwari Nature Reserve is a fantastic place to visit for a premium safari on South Africa’s Eastern Cape. You have a chance to find all of the favorite safari animals in the area. Spot elephants, lions, leopards, rhino, leopards, and giraffes. But also the antelopes, warthogs, hippos and other wildlife of the reserve.

The reserve offers a premium safari experience in South Africa. You can choose from the different Shamwari Reserve lodges for a fantastic safari and comfortable accommodation. Note that a few of these have an in-house spa. But if you would like a massage or spa treatment from the other lodges, this can be easily arranged for you. This is a great way to relax between your excellent safaris in the Shamwari Reserve.