Ranging from Central America to Argentina, jaguar are equipped with incredible jaw strength they use with incredible skill. Feeding from around 100 different species, in Central America jaguar regularly hunt sea turtles and wait on the beaches to ambush a favored prey. In the forests of the Amazon, jaguar feed on various animals, including capybara, tapir, and sloths, after these usually tree-living mammals venture down to ground level. 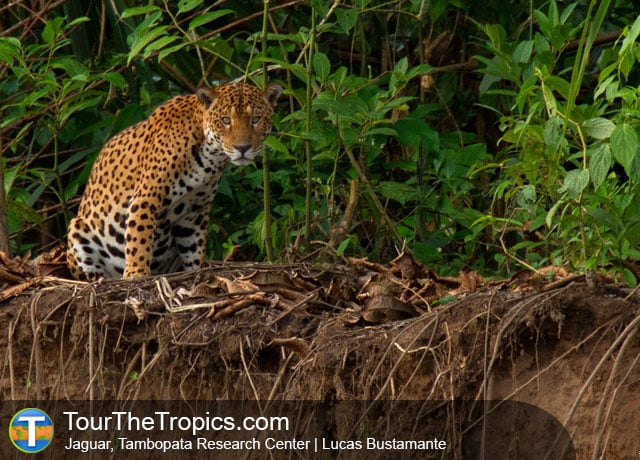 The Amazon Rainforest covers around 40% of the South American continent and jaguar roam the rainforest as the dominant predator. Here they can be seen sunning themselves near rivers or resting on logs in the mornings. We will first mention the best places to spot jaguar in the Amazon and will then mention spotting jaguar in South America’s wetlands.

Revered as a symbol of power by many ancient South American cultures, to this day they are the animal on the mind of every wildlife enthusiast and nature lover as they set foot on this incredible continent. The conversation is almost certainly happening now in the Amazon Rainforest with tourists asking their guide about the chances of encountering a jaguar on their forest walk.

Because of a jaguars keen senses, their ability to move silently through the forest, the abundance of trees, and their patterned coat adapted to blur their outline, seeing a jaguar in the Amazon is a very rare event, but it is possible to greatly increase your chances. 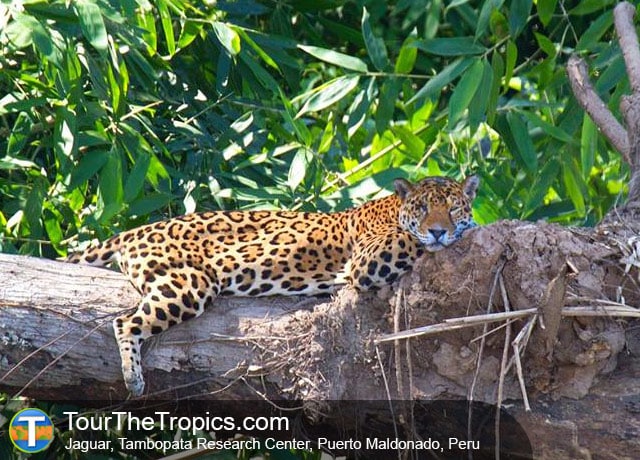 For example, there are certain places in the Amazon where animals, such as capybara and tapir come to feed. The best places to increase sightings of these mammals, along with many different macaws and parrots, are the Amazon’s clay licks.

Clay licks are areas, usually along the Amazon’s waterways, where clay is exposed to the air. The clay contains different salts and compounds that help neutralize the toxins in some forest foods. Macaws, tapir, monkeys, and capybara, among others, then visit these areas to replenish their salt supply and for their pharmaceutical properties.

The clay licks are used by indigenous hunters in the Amazon to wait for prey. Mimicking this behavior, the clay is also where Amazon tourists wait with their cameras poised for a shot of South America’s macaws and parrots, large tapir, a giant rodent called a capybara, and others. 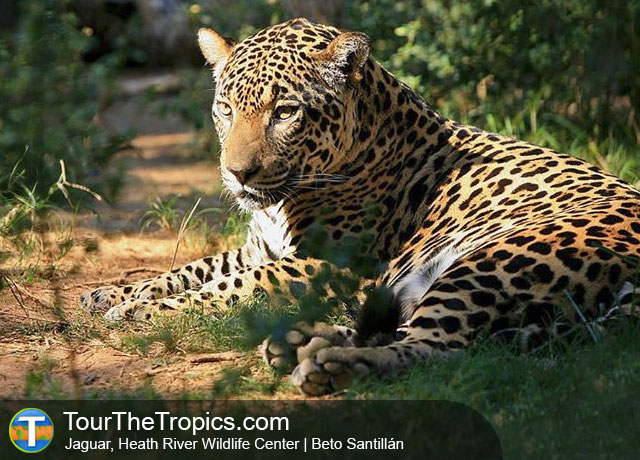 Humans have however only recently learned about the attraction of these areas as long before man set foot in the Amazon, jaguar roamed these clay licks ready to ambush their prey and this continues today. Areas with clay licks therefore not only increase your chances of seeing tapir, capybara, peccary and different monkeys, but also greatly increases your chances of seeing jaguar.

The area with the most clay licks in the entire Amazon Rainforest is southern Peru, which also has the Amazon’s largest tourism industry with different Amazon lodges spaced at different corners of the jungle. Our advice to maximize your chances of seeing rarer wildlife like jaguar in the Amazon is to choose one of southern Peru’s deep Amazon lodges. 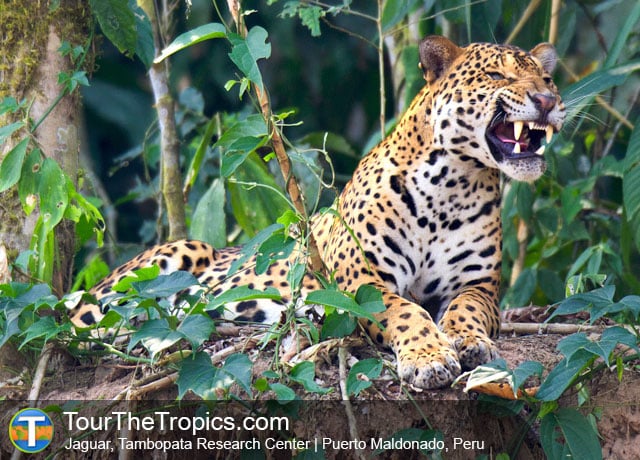 Deep Amazon lodges are placed in areas of the Amazon less disturbed by human activity than lodges nearer human settlement. This is where you find the most animals and therefore the best chances of seeing major predators, such as jaguar.

In southern Peru, three Amazon lodges stand out as a great place to maximize your chances of spotting these incredible animals in the rainforest, which we will describe below. Because these are very hard to find cats, the chance of finding these animals on a short tour is low, but not impossible. For example, the Manu Wildlife Center, a lodge world famous by nature enthusiasts, reports 10% of guests at the Manu Wildlife Center have a jaguar sighting. 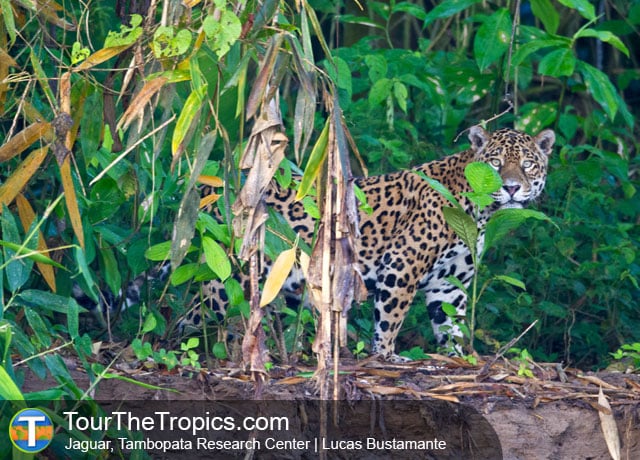 Manu Wildlife Center has been heralded by different travel publications, for example Conde Nast Traveler regards the Manu Wildlife Center as “the most intense wildlife experience in the Amazon”. This lodge is located in the Amazon Rainforest near Manu National Park, the largest and reportedly most pristine national park in Peru. From Manu Wildlife Center, you can enjoy macaw clay licks to see different colorful parrots, enjoy waiting for tapir at the nearby tapir clay lick, and enjoy chances to see giant river otters. As mentioned above, the lodge also reports that 10% of guests see jaguar.

A great lodge in a different section of rainforest, the Tambopata National Reserve, where you have a higher chance of seeing rarer and larger Amazon animals is the Tambopata Research Center. This lodge is located near one of the largest macaw clay licks in the Amazon and the animals surrounding Tambopata Research Center are at carrying capacity. This means there is a good amount of herbivores and their predators e.g. jaguar in the surrounding rainforest. Although we will mention again, actually seeing a jaguar on the days you choose to visit is low, but much higher than other areas of the Amazon.

Positioned in the middle of the wildlife-rich Tambopata National Reserve, near one of the largest macaw clay licks in the

There is another deep Amazon lodge between Peru’s Tambopata National Reserve and the adjoining Madidi National Park in Bolivia. To mention, this area of rainforest is part of a mosaic of different protected sections of rainforest. When taken together, this is one of the largest sections of protected tropical rainforest on Earth, which is about the size of Belgium at over 3 million hectares. On the Heath River, which runs between these areas, you can find the Heath River Wildlife Center. This lodge provides a tapir lick to see South America’s largest land mammal, a large macaw clay lick, and opportunities to see other habitats, such as the savannah of the Pampas del Heath. At these deep Amazon lodges, you then stand a much higher chance of spotting jaguar than in other areas.

Seeing jaguar in the Brazilian wetlands

A seasonally flooded tropical wetland about the same size as the United Kingdom, the Pantanal is the world’s largest freshwater wetland. This provides a chance to see many similar animals to what you can find in the Amazon, but with some differences. Because there are practically no trees when compared to the Amazon Rainforest, animals have adapted to the different environment. Capybara, for example, which are either solitary or in small groups in the Amazon, now roam the grasslands in vast herds.

Because of the clearer visibility and abundance of more easily caught prey for predators, the Pantanal is a great place to truly maximize your chances of seeing wild jaguar in South America. 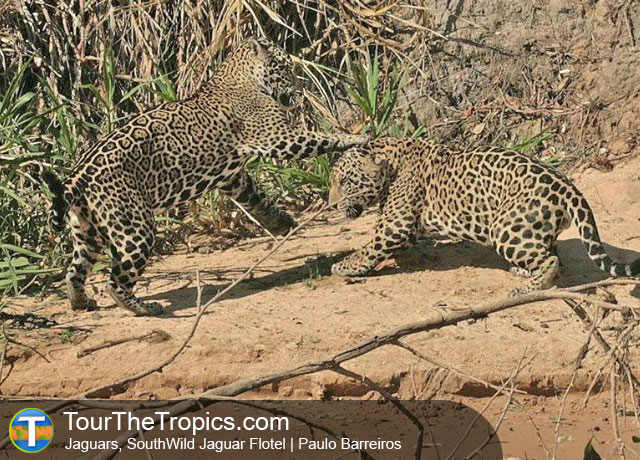 Here we will focus on a tour which provides the best chance of spotting wild jaguar in South America but is also regarded of one of the best tours for spotting wild jaguar worldwide. If you are only interested in seeing jaguar and this is the reason you’re wanting to visit the wildlife lodges then you should consider this tour as the top of your list.

Jaguar in the Pantanal Wetlands can get to weigh up to 350 pounds (150 kilos), which differ from their Amazon Rainforest neighbors which reach around half this weight. Because of strict control on hunting combined with the abundance of caiman and capybara as prey animals, jaguar can been seen 95% of the days of the year if you head out with the following tour.

The jaguar tour is focused on the Jaguar Flotel and Jaguar Suites, which feature air-conditioned rooms with private baths. These are floating hotels on the Pantanal’s waterways housing 10 and 6 double-occupancy rooms for visitors who want to stand the best chance of seeing wild jaguar. 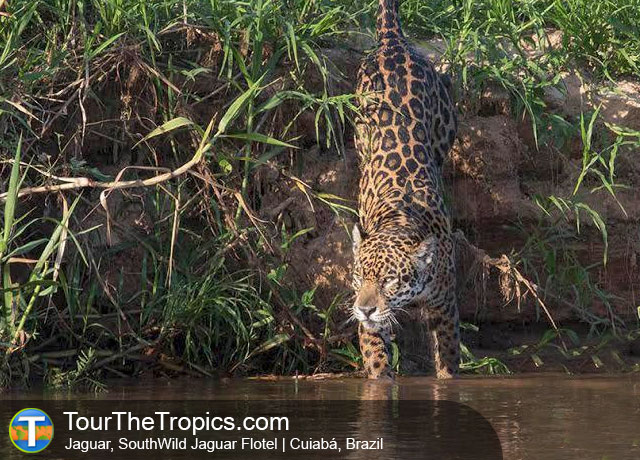 Your tour is of the world’s most concentrated area of wild jaguars in the Pantanal. For example, even of a daytime we see jaguars walking within 3 to 5 meters of the hotel and visitors can see jaguar from the comfort of the vessel.

The suites themselves are 30 square meters and offer some of the most comfortable rooms in the Pantanal. As a rarity from other tours, both of these accommodations provide high speed WiFi. 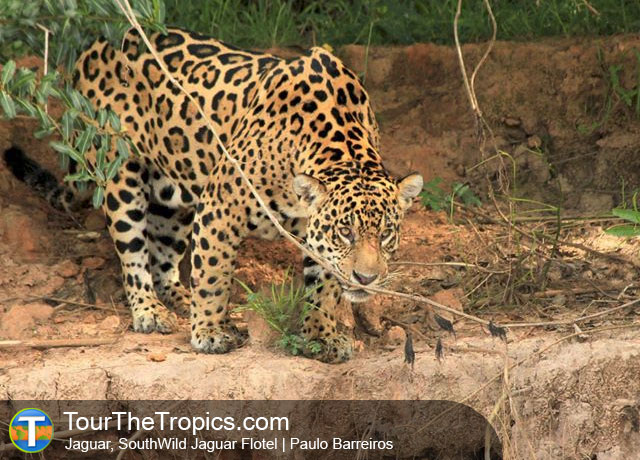 The jaguar trackers of the Jaguar Flotel have been studying the wild jaguars for years and now have a photo dossier of the faces of 100 jaguars living in the area.

The tour was founded by a PhD Biologist with a large presence in conservation, wildlife study, and tourism who also founded the Manu Wildlife Center mentioned further up the page. The owner of the tour also wrote the park policy for Manu National Park, Peru’s largest national park. 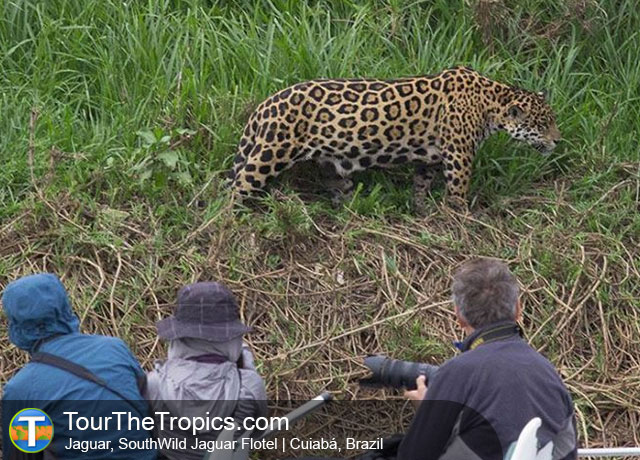 Your itinerary on the Jaguar Extreme tour begins in Cuiabá. Brazil, with lunch at the Quintal Buffet Restaurant. We will then travel down the Transpantaneira to the Pantanal Wildlife Center or similar lodge for the night.

After this, we will leave for the Jaguar Flotel into the heart of the Jaguar Zone. The next 3 days will be spent scouting the rivers for giant otters, the other major predator in the area, and jaguar. Currently, you are likely to see 2 – 2.7 jaguars per day while in the Jaguar Zone. Your last night will then be spent at the Pantanal Wildlife Center for your morning return to Cuiabá.

Cuiaba, Brazil, South America
At the end of the Transpantaneira Road winds a labyrinth of rivers on which our specially-trained tr More info
Book now